During an interesting and noteworthy chapter in my life, I spent a Summer working on the post-production of a film I wrote and directed with my childhood friend and our British editor, in the trendy meatpacking section of Manhattan’s West Village. Needless to say, I stood out from that crowd like a sore thumb… The meathead in the Jordans amongst the yuppies and arthouse types. But I liked that fact. Fitting in has never been my thing.

We made our own hours, getting up early to train, often working fifteen hour days, and commuted on the subway from Astoria, Queens daily where I slept on the floor four nights a week. That Summer in New York City–both professionally and personally, was incredible. Enriching, fulfilling, challenging, enraging, entertaining. Full of equal parts drama and dream-chasing.

It was a taste of the autonomy that I always dreamt of, but was only getting a chance to enjoy for a brief spell, for the first time. A couple of recklessly righteous kids from Jersey, with their equally irresponsible, ambitious hip-hop-infused film about Atlantic City. We worked on the fourth floor of the Goldcrest Post building. And our little rebel outfit had one rule of entry… You had to take the stairs.

Four flights. No big deal. Not as a test of stamina, or any sort of overt fitness-minded lifestyle change. But if you ran to the corner bodega for a sandwich or to the lobby to scoop up a FedEx package, you had to hump four flights down and haul four flights back up. Mostly, because we knew, no one else would do that—stubbornly opting for the “hard way” for no good reason. No normal person would unnecessarily hold themselves to that unreasonable standard. And no one would have any clue that was our own internal company policy. But we knew… And that has always been sufficient. 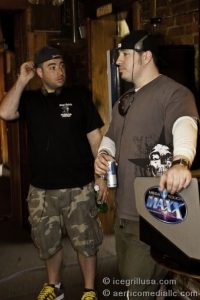 The funny thing is, that as I reflect on that sultry city Summer, I shake my head at the gorgeous naivete and vain-glorious audacity that found us in that place, at that time. We had no right to be there. And at the same time all the business in the world being there. But we just weren’t ready. And that’s the cold truth. Professionally, emotionally, artistically, we were raw, green and arrogant. Our own best advocates and our own wickedest enemies… Stumbling on the line between being the best dudes in the world and the worst businessmen possible. But often, that’s how you learn.

As I think back to that seemingly trivial anecdote about the post-production house’s stairs, I am struck by the metaphor. That Summer constituted a few important steps on this climb. I stumbled and busted my knees and elbows, but I dusted myself off and regained my footing. And kept climbing, slowly. What I learned about the world, about business, about human beings, about opportunity, about myself, still imparts invaluable lessons to this day. Were it not for that brief chance to see what was possible, I might not be in the position to share these words with you today. I never would’ve known it then, but often that’s how life works.

There was an elevator at Goldcrest. But there’s no motorized lift to any real, lasting success in this world. Even if there was an easy, fast-track to the top, I’d probably refuse to take it. Cuz some dudes were just born to climb. And if you want it bad enough, you’ll be OK with this unavoidable fact… You’ve gotta take the stairs. 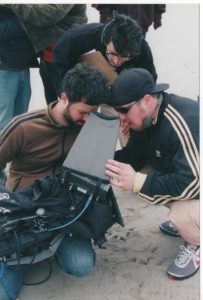