I’d be lying if fear hasn’t been among my most primary sources of motivation over the years. Back in the day, I wrote a journal entry about the “love of fear” which gained some viral traction, simply stating how learning to productively process fear has been a powerful contributing factor to any progress I had made in life.

The fear that has always driven me most, was the terror of never reaching what I had abstractly come to understand as “my potential”. And whether or not I have been long overestimating that upward trajectory is debatable, but I’ve always believed that with equal parts effort and opportunity, the sky was the limit. That’s what older folks had always told me, that’s what I came to expect, that’s what I inherently understood to be true. And with those expectations from myself and others, with that elevated standard, came the palpable pressure I’ve carried with me since my teens. For better or worse, that pressure converted fear to fuel. That fuel fed me.

Beyond whatever I felt as being my own high ceiling, I was also pushed by again and again seeing people with what I perceived as incredible upside coming up short. Athletes my senior—often older dudes who seemed to have it all—looks, brains, girls, glory, who burned out just as they began to pave a path. Either victims of circumstance or vulnerable to the will of their own demons, they ended up chained to the barstool of a local watering hole. Or worse. With what some of those guys meant to me in my formative years, I’ve long fought to ensure that such a destiny would never be mine. Those guys deserved better. So, I thought, did I. 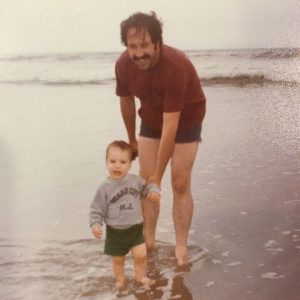 That feeling, I felt most deeply and profoundly, when observing my own father. He was as brilliant, as tough, as caring and charismatic as any person I’ve ever known. He was also stubborn, hard-headed, fiery and volatile in a manner that I’m sure bit him in the ass from time to time, as such a disposition occasionally did his son. My father never failed—he provided three square meals and then some for me for two decades plus. He kept the lights on, the bills paid, fresh kicks on my feet and put my ass through college, all while expending his life force hard-wiring me for my future quest. In every way that mattered, he triumphed. He is my best friend, my mentor and my motivator to this day, and his words echo forever in my mind and heart. And he left an indelible impression on many. But the dude should have been a leader of industry, and the stars never lined up.

In this way, part of what has motivated me–beyond the fear of squandering my gifts and abandoning my dreams, has been the concept of legacy. Not just legacy building of my own, but the legacy extension of my father. What he put in me, must live beyond my days, so that he lives well beyond his. In my daughters. In my friends and associates. In my words and actions. And in what those words and actions are able to build. This business, I take quite personally. Largely because, in my mind, it has all become much bigger than just me.

To some extent, I feel like time and situation rob worthy people of opportunities. And often when those rare chances pass, they are gone forever. Whether it is a college scholarship or a dream job or senior football season, seasons come and go, and often when they don’t realize it, the sun sets on a man’s ambitions. And winter approaches.  That thought has always terrified me, not only when pondering my own fate, but when empathetically considering the perspective of another, coming to such a grim revelation. Because the honest truth is this… There are dudes way smarter or more talented than you and I, who missed their shot and were never heard from again.

So part of my mission, as I’ve grown to understand my place in the world, is to pay tribute to all of those who spilled the blood, who paid the dues, who laid the foundation upon which we stand. Kings like my Pops, who deserved their time to shine, will have their day in the sun, through me. I’m here to collect on every debt owed to every one of the real motherfuckers who made my moment possible. And it is time for history to pay up.