A few years back, at a seminal stage in this leg of my journey, I wrote an article entitled “Go Hard”. I was standing at a crossroads in my life, on shaky ground. I was unclear of what the future held, and I felt dark skies grimacing ominously above my head. My father had fallen ill. I had the rug pulled out from under me in what was the biggest artistic and business venture of my life to that point. And a recent friend I had made in the production of a film, Josh, took his own life, leaving behind an infant daughter.

I was commuting to Manhattan from the Philly outskirts via the New Jersey Transit Northeast Corridor train a few nights a week, right around the holidays, to finish post-production. Pretty unsure of how I was going to adequately provide for my family, and worried if my dream had just died, I arrived at Penn Station. Decked out in holiday regalia and the hopeful hustle and bustle of the Christmas season in NYC, the train station was at the same time both monolithic and quaint. I ascended the escalator to the main concourse in the midst of it all, and felt nothing.

Fur coat-clad women with shopping bags from Macy’s. Businessmen rushing home to their house in the Jersey suburbs for dinner with their families. I witnessed the typical trappings of holiday happiness and through the cold fog of my numbness, I seethed.

Despondent with melancholic anger, I knew I needed more. I wanted meaning. I wanted to make sense of the senselessness that seemed to engulf my life at that moment. I wanted to feel bad for myself, but self-pity was a luxury I could not afford. It was at this moment that I realized so much of our prosperity in this world hinges on our ability to endure the hard times with defiant resilience, simply refusing to be broken by forces that break people daily. There’s a thin line that separates the victims and the victors, and often the difference simply lies in surviving. I knew here was too much riding on me… Too many looking to me… Too much to live up to, to give up before I had even really began.

At times I recall with fondness, my late buddy John Rock. When I was twenty years old talking with equal parts apprehension, arrogance and ambition about shooting a film on a script Mark and I had written with kids, he instantly, without hesitation or equivocation, simply believed. Speaking of something even close friends and family, or people who had known me for years, dismissed as the foolish aspirations of a naïve idealist so new to the “real world”, when running it by a casual acquaintance from our little gym culture in Brigantine, it seemed he couldn’t help but be effusive in his positivity. He understood. And he believed. That stuck with me forever. These are the good vibes a guy like me never forgets… Obvious, in my glowing recollection of a passing conversation from two decades ago.

It is no exaggeration to state that positive energy, and the faith of good people, are precious to the ambitious among us. When you feel like you’re inching further and further out on the limb of life, it is good to know, not only that there are people praying that you don’t fall, but furthermore, who are confident in your balance and footwork. Who believe that not only can you navigate your current standing deftly, but have it within you to climb higher. What a joy to encounter those who are able to see your vision. To share it. And to believe.

There are many incredible individuals that believed along the way. Who dedicated time, effort, intellectual capital and resources just to arrive here, ready to face this challenge together. Tara’s muse inspiration, unwavering faith and steadfast support. Dirt’s design genius and singular personality. Sko’s beautiful mind and measured perspective. Christian, Anousone, Chase, Shady, Alicia, Ant, Steve and everyone else who has been down since the jump—dedicating everything from good energy to long weekends, all for the cause. As well as several unnamed individuals pivotal to this process. All priceless. Propping me up when needed. Sharing the burden of what would be an impossible quest were it not for their help.

It is worth noting, however, for the sake of the record, that all of those guys actually know me. We’ve been through it together, been through the ringer sometimes, sharing many wins and losses along the way… All substantial relationships of varying degrees and levels of sophistication, going back several years. But in our recent travels promoting the brand, I came across a similar kindred soul with a natural John Rock-esque positivity to his demeanor. Another unique personality who struck me in his candidness. His understanding. His no-bullshit nature. One of the first stores to carry our first product was the epitome of all the things I value about our subculture… Passion. Honesty. Vision. Hard work. That place was Hardcore Nutrition in Manahawkin, New Jersey. Helmed by Brian Heck and his fiancée Devin. People like them, and places like Hardcore, gave me confidence that I was on the right track. That the audacity of this enterprise was justified, and destined for the hard-earned, war-worn greatness I had sought with every fiber of my being. 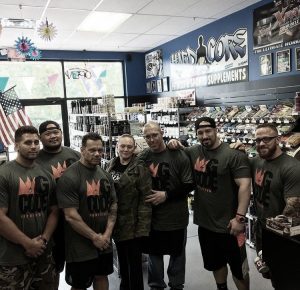 In recent weeks, I had exchanged sporadic texts with Brian as he had injured himself, breaking his foot and was due for surgery. Through his ordeal he was funny, witty and insightful in his text messages, as I had come to expect in the short time I had known him. During that time, I had stopped by their local store a couple of times with my daughters, to spread good will and check in, picking up some staples—supporting folks that were supporting me. Brian wasn’t there, as he was home resting restlessly, immobile. But Devin was expertly manning the ship and was kind and hospitable each time we’d visit. It seemed all was well, considering the circumstances. And then, in the blink of an eye, word got back to me that Brian had unexpectedly and inexplicably passed away. Just like that. At only 39 years old. On June 30th. My 39th birthday.

How fragile and precious life is, I thought. How at some point in our days, we all will unavoidably be here one day and gone the next–leaving all that we have, all that we’ve done, all those we love, in our wake. The tragic news of Brian’s passing left me speechless—so sad for his loved ones, contemplating my own mortality and looking to make sense of the fleeting, transient nature of our existence in this realm. I reached for my phone, looking to read my most recent conversation with him. And I was struck by the profound nature of his last text to me. One I will share with you here, to allow the wisdom to fill your heart and mind and live a life beyond mere cellular data. It read exactly…

KEEP MOVIN FORWARD. Even if I’m dragging one dead leg behind.

There are days that I find myself anxious. Unsure. Feeling the weight of at least my world pressing down on my mortal frame. It would be easy to buckle under that pressure. To shy away from the demands of my vocation, to shrink away into the shadows. But in all honesty, that has never really been an option. When times are tough, my sole survival mechanism has been to survive. My fall back option has been to never back down, no matter how many times I fall. Because, like I’ve always intrinsically known, this is all bigger than just me. It is for my Dad and my daughters. My muse and my mother. For each friend that ever believed. And for every real dude who deserved better and never got the chance. I am buoyed by the spirits of the Joshes, John Rocks and Brians of my life. In my defiant struggle, they endure. In their memory, we will go harder. Harder than even we thought ourselves capable. Because there truly is no other choice. We will keep movin forward. Even if we must drag one dead leg behind.