All Hail the KING

When you spend your entire adulthood as a sports nutrition “guinea pig”, running supplement experiments on yourself, you tend to learn a lot. About bunk science, pseudo-science, bro-science, real science and everything in between. You also spend a good amount of time vacillating between polar opposite emotions–from hopeful and enthusiastic to disgruntled and disappointed. And in that continuous process, you figure out what works. 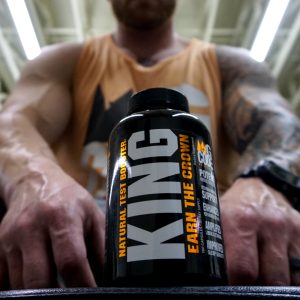 As a lifetime “drug-free” athlete, I’ve also brought guarded optimism to the table in every attempt to find that elusive “edge” in pill or powder form. And once the early andro ancestors and ephedrine had the big brother hammer dropped on them, that edge became more and more difficult to find. Your options were grey market stimulants chemically identical to street drugs and bootleg oral steroids sourced from God-knows-where, so those options were not

options for me. The risks always seemed to drastically outweigh the rewards. But I still wanted to be big and strong, so beyond the most critical core basics of whole food and heavy iron, I was willing to try it all.

In launching GCode Nutrition, one of the core principles of the brand, was to create an open and honest dialogue with our consumers. To create simple and effective products with our own unique vision—products that we would swear by and enthusiastically use daily ourselves, the rock-solid foundation of our own personal supplement programs. If we don’t love and believe in a product whole-heartedly, then it has no place in the GCode Nutrition line.

In search of gaining that edge, I decided to formulate what was my own personal brew of herbs, vitamins and minerals, a combination I have relied on for years. One that was safe and free of unwanted side effects, but one that I personally found to be potent and powerful. In creating KING, I seek to share my edge with you. Not empty promises and hyperbolic hype. No shady compounds or science fiction. Eight ingredients. Vitamins, minerals and potent herbs in efficacious amounts. In every bottle of KING you get 30 days’ worth of what works, for a month of performance-enhancing hormone support.

Instead of loading a label with exotic roots and flowers from around the world and then speculating about their potential benefits, we instead chose three herbs which have been utilized by lifters and athletes for years. GCode Nutrition loaded KING with big doses of Ashwagandha, Tribulus and Fenugreek in what we call the “Herbal Test Trinity Complex”.

An ayurvedic herb renowned for millennia, Ashwagandha has been touted for its ability to fight stress and reduce cortisol levels, as well as countless other benefits to general health and wellness. This adaptogen also, however, has been shown to boost testosterone levels and improve fertility in males. KING contains 600mg of Ashwagandha per six capsule serving.

First hailed by Bulgarian Olympic athletes decades ago, Tribulus Terrestris is a natural botanical extract that has had buzz in bodybuilding and weightlifting circles for years. Tribulus enhances the KING formula by stimulating the production of lutenizing hormone (LH) in turn potentially leading to increased testosterone production. Each serving of KING includes a potent 600mg of Tribulus Terrestris, standardized for a minimum of 45% steroidal saponins.

Derived from Indian and African plants, Fenugreek is a natural herb popular in holistic medicine for hundreds of years. Containing furostanolic saponins, Fenugreek has been shown in studies to increase testosterone production resultingly improving strength and body composition while also boosting libido. Six capsules of KING contain 500mg of Fenugreek seed extract, standardized for a minimum of 50% steroidal saponins.

That’s 1700 total miligrams of Ashwagandha, Tribulus Terrestris and Fenugreek, working in synergy. What we’ve dubbed the “Herbal Test Trinity Complex”. It is potent, powerful and could help potentially produce profound progress. But there’s more to KING than just herbs. There is much supreme sophistication in the simplicity of three more basic KING components—a trio of vitamins and minerals.

An essential mineral, hard-training athletes tend to be zinc-deficient. Proper supplementation with this “master mineral” can boost immunity, thyroid function and protein synthesis while also raising serum blood testosterone levels in those displaying even a mild zinc deficiency. A robust 40mg of zinc can be found in every serving of KING, alongside its brother overlooked anabolic mineral—Magnesium. 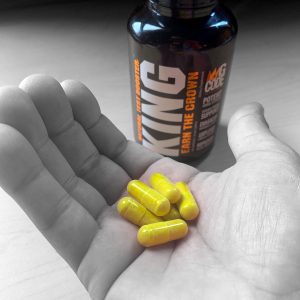 human machine. From protein synthesis to bone density to muscle and nerve function to relaxation, Magnesium is a necessity, and most hard-training athletes are deficient. Supplementing with Magnesium can address these deficiencies that may translate to optimized androgen production. Every serving of KING contains 300mg of Magnesium Citrate, a form celebrated for its many nervous system health benefits. Anecdotally, taken together, zinc and magnesium are touted for their ability to improve sleep quality and restorative REM sleep.

The sunshine vitamin, Vitamin D3 is critical in enhancing immunity, bone strength and improving mood. But yet another micronutrient in which many athletes tend to be deficient. Higher dosages of Vitamin D3 can address these deficiencies and promote testosterone production. KING contains a whopping 3000iu dose of D3 in every six capsule serving.

Another underrated anabolic mineral, Boron represents one half of the “Utilization & Uptake Complex” designed to amplify the potency of KING, helping it re

ach its maximum muscle-building impact via natural pathways. Boron helps to unlock free testosterone, integral to capitalizing on any increase in total testosterone production facilitated via the herbs, vitamins and minerals in the KING formula. After all, you’re supplements are only as good as what you actually are able to synthesize and use.

Which leads to the last, but certainly not the least, active ingredient in the awesome KING formula, the patented black pepper extract, Bioperine. Known as a powerful “bioenhancer”, piper nigrum has myriad positive effects on everything from metabolism to mental acuity but is most highly regarded for its ability to greatly increase nutrient absorption. Adding Bioperine to the K

ING formula ensures that you are maximizing your test-boosting bang for your hard-earned buck, getting the most kick out of the seven other strong constituents found in six capsules of KING.

The fourth GCode Nutrition product to come to market, KING doubles down on our mission to deliver tools to empower the members of #GCodeNation. Simple yet sophisticated, KING seeks to reign supreme over

other test boosting products without the flash, false claims or fugazi ingredients that have burned countless serious athletes in the past. Eight time-tested ingredients in efficacious dosages gathered into a single natural formula. Designed to give you that edge you’ve long sought, provided by the company you trust. GCode Nutrition KING has arrived. All hail the KING.