The concept of “Black Hoodie Season” was given life in a bygone era, as much the manifestation of a mindset, as it ever was a fashion statement. To understand the significance of what is our collective’s fifth Black Hoodie Season is offering, one must first know its origin story.

In 2013, as a novel and non-traditional method of raising awareness and potential funds for a future film project, #GoHard took root under a black-barred shroud of anonymity. A collision of interests and influences, it quickly became a brand all its own, a furious four-year flurry of apparel and graphic art and written rhetoric, all sort of anti-establishment in tone. All leading to a series of self-published motivational manifestos, books entitled “The G Code”. A direct line from which points to where we stand today at the helm of GCode Nutrition. 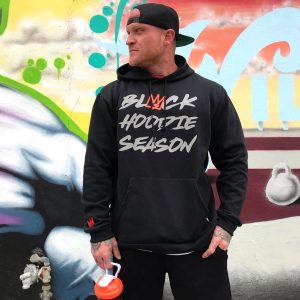 Eloquently written revisionist history to suggest that this was the plan all along would be easy to pen, but would most certainly be a ruse. The fact of the matter is that the impetus behind the creation of so much, was an emotion often linked to destruction. At the core of this journey of expression and empowerment, was despair. I was desperate for self-determination and autonomy. Desperate to live to my potential. Desperate to be the man I was born to be. In this profound sentiment, I knew I had found existential common ground to which others on a parallel path, facing similar life challenges, could relate.

In a past life, I would find myself in regular moments of slight or disrespect, and I would escape inward and seethe. But instead of lashing out, I would internalize my frustrations. I would take ingratitude and disappointment and convert it to fuel. I would bottle up my anger as it related to my circumstances, and what I felt was the wasting of my potential and my lack of control, and I would channel it into my endeavors—a raging inferno in my soul hot enough to either power me and those in my circle, or to burn me alive. Determined to chase down my destiny by any means, I would set aside time daily for the productive pursuit of my dreams, and as I had convinced myself with an internal thematic mantra, I would “write my way to a better life.” It was vague and undefined, but as a path forward to a brighter reality for myself and my family and friends, it was all I had.

Just as in the gym, I desperately sought progress. And that personal growth would only be possible with equal parts hard work, diligence and a willingness to endure the pain. Every day I would deliberately inch in the direction of my aspirations. And those minor marginal advances were everything. Those inches gave me life. They gave life meaning.

In that time, I thought of myself as an artist working on a masterpiece in secrecy. Creating something of timeless stature and substance, in the shadows. As an article of clothing, the black hooded sweatshirt became an extension of my mind state. A wardrobe staple of the East Coast, it was simple and understated. Dark and menacing. So utilitarian it became fashionable. The hood, much like blinders on a racehorse, demanded focus. Shrouding my massive ambitions, literally and figuratively, it gave me cover.

Difficult conditions test our resolve. As the nights are longer and Winter approaches, a cold darkness purveys all aspects of life, leading us instinctively to search for warmth and comfort. Such a setting makes retreat easier to rationalize. Black Hoodie Season represents defiance to such surrender. Our fifth version of the design since 2014, BHS is infused with resilience. endurance and survival.

From an idea sketched on Dirt Malone’s desk six years ago, was birthed, quite literally, a season of our lives, and one of the most important traditions of GCode culture. We are so proud to share Black Hoodie Season with you yet again, this time a fully custom re-imagining of the original, like always, seeking to improve on the past, while never forgetting where we came from. Determined in our unyielding drive to be the brand you deserve. One unlike any other. Together becoming undeniable.