The Weights: A Love Story, Part. 1

When I was 14, I remember a peer making fun of me in the freshman hallways of Holy Spirit High School. Basically, inferring that I slept with my basketball every night. It was so important to me he posited, that it had superseded everything else in my existence, and by logical extension, instead of bedding the girls in my class, I was fucking my basketball every night. The kid was an immature asshole, and it was embarrassing, but with time, I came to realize what his real issue with me was. He saw in me dedication and consistency, passion, that he couldn’t comprehend through the small lens of his life. And in such an uncomfortable position, our natural proclivity is to poke fun.

In the eighteen months that followed, I endured a roller coaster of raw emotion and profound disappointment that characterized my entire, remaining basketball “career”. Basketball was, in fact, fucking me. But that year and a half or so was not so barren that it didn’t produce some nutritious fruit—bountiful in a way far beyond what hoop ever could be. In my preparation for a sophomore campaign that wasn’t to be, with me quitting the team before the regular season began, I diligently went to afterschool conditioning a few days per week—running on the track and hitting the weight room that was housed in the base of the football bleachers. For all real intents and purposes, this was my first time spent consistently with the weights. I was fifteen years old, and I had been exposed to the virus of the iron.

At this point, it would be inaccurate to say this was my first time “training”. Anyone who knew me in seventh and eighth grade would confirm I was already on a “program”. I would run distance and sprints, jump rope, do calf raises on the steps in the apartment stairwell and each night before bed I would perform a regimen of bodyweight exercises and freeweight movements using the lone weight I had, a 25 lb dumbbell I acquired in barter through one of my Pops’ buddies. I had devised this on my own, as an attempt to do the sort of daily training in which I’d imagined all great athletes participated regularly. 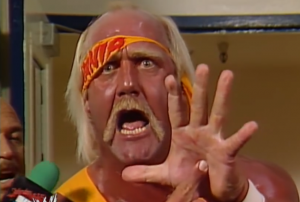 On a trip to the local Rite Aid around that same time, one day I managed to talk my Dad into buying me $20 of random miscellany, as I was known to do when his pockets were fat. One of the items I grabbed at the pharmacy was an Iron Man magazine with Dorian Yates on the cover. I read it cover to cover each night before bed, over the course of the next week. I was so intensely fascinated by it all, as such hyper-musculature wasn’t entirely alien to me. My adolescent mind had been infiltrated by Masters of the Universe, WWF and the Super Friends. My concept of the ideal masculine form has been skewed since I was a young boy. And I had been saying my prayers and taking my vitamins every day since. I still am.

My interest in the iron had now gained steam, and I needed an outlet. As I had always done when a notion captured my fancy prior, I explained to my mother my situation and I had a solution. After church on a Sunday morning I talked her into a trip to the Shore Mall. There, was a now defunct department store called Clover, that I always found to be strangely resourceful when it came to products of all sorts. They had a set of DP Orbatron weights. They were a silvery grey plastic, filled with concrete. They came with an adjustable barbell and two similar dumbbells. As was her way throughout the years, my mother would support my vision—even when she didn’t completely understand. She bought me the weights. And set a movement in motion. I sit here and write these words today, because Ma Dukes supported her son enough to drive him to the mainland and spend thirty dollars on a Sunday afternoon at an old, rundown mall.