We want control. We seek to protect our vision. We expect excellence from ourselves, attempting to craft a flawless image which we can proudly present to the world. We craft and curate each word, every picture, remaining forever “on message”. Haircut, good lighting, fresh kicks. You know, we woke up that way. I’m as guilty as anybody. We demand perfection, because as we see it, perfection is the opposite of failure. And our idols never fail. So, by logical extension, if we’re ever going to be great too, we can’t afford to fail either.

This is the bullshit sales pitch we’ve bought via Hollywood publicists and social media for years. Where human beings become manipulated marketing machines, seeming to have hiked down from Mt. Olympus or disembarked a spacecraft in Los Angeles, delivered to us as fully-actualized demigods in all their splendor. But you dig a little deeper and, as usual, you unearth the real truth. That underneath the capped teeth and tanned skin, below the awards and adulation, are countless layers of failure and disappointment accumulated over years and years. Just dudes being dudes, until they become the man. In this often-undeniable fact, I take solace.

Since I was a kid, my aspirations have never been all that relatable, terrestrial or attainable. I never played it safe. I never lowered my standards. I never moderated or watered-down my dream to match other people’s understanding of what was realistic. As such, I’ve fallen flat on my face many times. But in each of those instances, I dusted myself off, cleaned the dirt off my mug, and managed to keep moving forward. My life has been a series of consistent failure and frustration, through which I have managed to triumph in my own small ways. Finding meaning in rejection and purpose in pain, over and over again. Standing strong, defiant to the weight of the world bearing down upon me. Failure has become an integral part of my process. Because not unlike in the gym, flirting with failure for a long time has made me strong.

Training to failure, in lifting terms, refers to a state of being where your muscle cannot muster the strength to complete another repetition. Exerting yourself to the point that in that moment, you have nothing left to give. Dropping the weight, collecting yourself, gathering your focus. And then doing it all again. Do that enough, and your body is forced to adapt by growing bigger and stronger… More capable and more prepared to handle your next fight with the iron. By failing in your endeavors, repeatedly, you get better. This is life. From each loss I have absorbed, I have learned, able to extract skills and experiences to add to my figurative tool box. My preparedness improving each time, readying me for my next undertaking.

So many of the matinee idols and role models you have placed on a pedestal have a secret—one that you’re not supposed to know. On their climb to the top, they all reached a crucial point. A time in their lives where they had toiled in vain and given their all to their dream for years–making their support system proud, doing all that could rightfully be expected of a mere, mortal man. And yet were not yet successful in the manner in which they desired. The difference between them, and every talented dude you never heard of, is that they kept going. Past the point of common sense. Past the point of good judgement. Past the point that no one would’ve blamed them had they quit. They. Kept. Going. 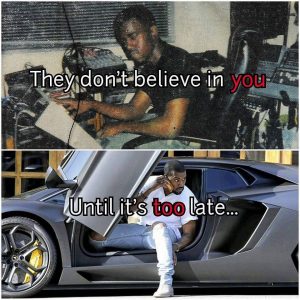 The “secret” is a really a spicy gumbo of unabashed audacity… Having the unapologetic arrogance to believe in yourself despite setbacks. Developing the sort of bulletproof certainty that allows the snide opinions of critics to ricochet off your ebullient spirit. Being courageous enough to double down on yourself, even when the odds aren’t in your favor. Generating the momentum necessary to continue making progress in the right direction, even when your dreams hit a brick wall.

The truth is, legends aren’t born of privilege, drinking from a silver chalice. They rise from the gutter. Surviving and enduring the shit that levels most. And instead of being run into the ground, they respond with rebellious, aplomb. Bouncing back. Resiliently refusing to be denied their rightful place in this world. They use the fall as fuel, finding a way to fail forward.