In recent days I have been asked many questions about the GCode branding. Most notably about the significance of the crown. It is a story that harkens back to my teenage years. And one that has evolved as I have, becoming more and more meaningful as I have grown and matured.

The crown first became personally significant to me as a teenager, when I decided I would tattoo it atop an Olde English “G” on my shoulder. At eighteen, in the audacious spirit of a young idealist bent on making his mark, it seemed so fitting. It was cocky and arrogant. But, if I’m completely honest, it was equally done as something to look cool when wearing a basketball jersey as it was a declaration to the world. Little did I know, at eighteen I had already created my own personal insignia.

That crown meant more and more to me as I clung to difficult dreams neck deep in the choppy waters of responsible adulthood. Were I to be king of my world, how could I ever abandon my ambitions and settle for anything less than a life uncommon? I had etched into my flesh a standard. A lofty ideal to which I had to constantly aspire. I could not let that brash young man from Jersey down. It is a lot to live up to. 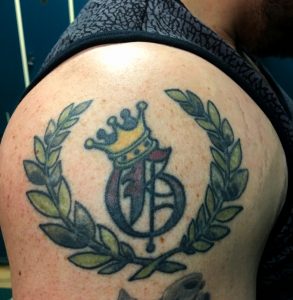 Different than the more ornate king’s crown on my deltoid, I opted for the GCode Nutrition logo to be a simple crown. One without flourishes or jewels. Meant to occupy the same space as the “#” hashtag in the #GoHard trademark, a nod to our roots. It is italicized, so as to infer forward moving progression. The basic structure, and the spray paint assets are indicative of the powerful influences of hip-hop, and to the concept of genius being found in unlikely places. Jean-Michel Basquiat’s street art was an obvious inspiration.

Another element of the crown is the lightning bolt, which to me represents a duality of meaning. The strike first represents the electric surge of inspiration, that hits from out of nowhere. It is one of the greatest sensations a creative person can experience. And something we seek to deliver often, in high-voltage bolts that land in the brains of those in our circle.

Beyond the obvious lightning connotation (and the allusion to Roy Hobbs’ bat in “The Natural”), that graphic element also represents a crack. A flaw in the structure of the crown–damage from enduring the elements. It is a war-worn crown. Not something you inherit because of birthright. But instead a crown that is earned. One that is taken by force. Meant to symbolize that no one owes you anything. At birth you are guaranteed only death. And the more challenging your circumstances, the more dramatic and desperate must be your reach for that crown.

Your dream will not be given to you. You must take it.