There are thin lines that surround us. Dividing madness from genius, pleasure from pain. We toe them cautiously, forever attempting to err on the side of the positive and productive. But we know well, that the closer we move toward “the edge”, the more in tune we are with our potential–even when we are but a misstep away from oblivion.

In a recent conversation, I shared what is one of my favorite private experiences. Being alone, at off hours—really early or really late. Training. Pre-workout in my veins. Tired, somewhat running on fumes. Hip-hop banging in my ears. By myself, in my thoughts and feelings.

I once saw this origins of surfing documentary, called “Riding Giants”. In it, there was a portion that highlighted Jeff Clark, who discovered the Northern California Mavericks—a surf destination that featured waves that routinely crested from twenty feet high to greater than five stories. Thought not possible by “experts” in terms of physics and geology, Clark surfed these waves alone for more than a decade, in anonymity. No one believed they could exist. What inevitably would become one of the most epic and incredible places in the world for big wave surfers to ride, was once navigated alone by one brave dude. In the film, a godfather and pioneer of surfing, Greg Noll, posited that it must have been an remarkable thing, for one person alone to know of this phenomenon, and face it intimately every day… How powerful it must be for a man to “internalize such emotions” by himself for years. I understand this, and not just because I’m a kid who grew up on a South Jersey barrier island. I get it because there was a massive wave that has been building for more than a decade, that I faced alone. The only difference, is that mine was breaking inside of me. 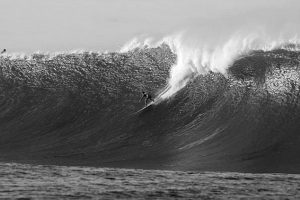 In the past I have postulated that if a person can’t burst into tears just thinking about their dream, they don’t want it bad enough. Contemplating such a statement, some folks will look at you like you’re crazy… The alpha males only seeming to understand the sort of aggression that might find you running through a wall. But I might argue that these sorts of emotions are inextricably linked. In tune with all that makes me who I am—there is complexity beneath my drive that is greater than just blind rage. There is anguish and loss. Gratitude and devotion. Hunger and pride. Faith and failure. Defiance and disappointment. Pressure and rebellion, and most importantly, love. All of which amounts to much more than just mere anger. Having something to prove to history and fate–and the entire universe, is heavier than any one chip on your shoulder could ever be.

When I am alone in this sacred place with these weights and these beats, it is spiritual. I am rubbed raw by exhaustion and circumstance. I am vulnerable, yet I am becoming bulletproof impenetrable. In this state, I am exposed, open to be inspired. And this is the moment where the lightning strikes in my soul. My eyes water. I get the chills. The hairs stand up on the back of my neck. And toeing that line cautiously between madman and mastermind, I contemplate the potential of it all, and to myself, I smile. Here I am. Riding my wave, one that has been building since I was a boy. Alone. On the edge.